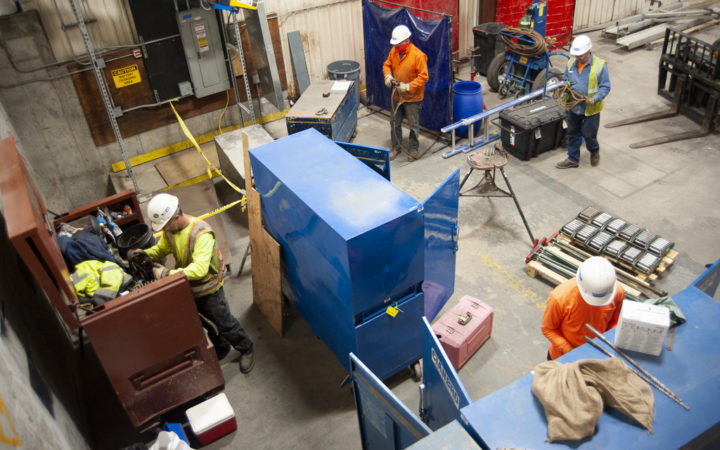 PITTSFIELD, Maine — Renovations and recruiting have now begun for the Somerset County expansion of a Guilford company that makes the nasal swabs that are critically necessary to test patients for the coronavirus.

Before that can happen, many changes are now underway at the old manufacturing facility that used to make fire alarms — and before that, woolen products — under its previous owners, but which recently has been serving as warehouse space after United Technologies Corp. Fire and Security shuttered its plant in 2014.

Cianbro, the Pittsfield-based general contractor that now owns the 95,000 square-foot building, is overseeing workers from many different Maine companies as they strip out its existing utilities, power wash and repaint its surfaces, install new heating and ventilation systems, and make all the other upgrades that Puritan will need to start operating there.

“It was a significant blow,” Cianbro Chairman Peter Vigue said during a tour of the construction site this week, referring to the 2014 closure by UTC, which was Pittsfield’s second-largest employer. “But this is going to be a significant opportunity.”

At the same time, recruiting has recently started for the more than 150 positions to staff the new Puritan operation, according to Lee Umphrey, the president and CEO of Eastern Maine Development Corp., an organization that is helping with the process.

Open positions are now being advertised on EMDC’s website, including for supervisors, inspectors, machine operators, team leaders, technicians and helpers.

Umphrey said it’s not yet clear how many applications have been coming in or who is applying, but interest seemed to be high when EMDC posted about the openings on its Facebook page. The May 11 post has been shared around 350 times and seen by more than 20,000 users.

“Hopefully a lot of the eligible people will apply,” Umphrey said. “It’s meeting a need for Maine and the country for this product. Testing is key to the economic recovery, so these jobs are helping with that.”

Puritan is now pursuing its expansion under a $75.5 million contract with the federal government that’s meant to help it grow and address the nation’s urgent need for more COVID-19 testing materials.

The new plant will be able to make up to 40 million per month of the foam swabs that are inserted into people’s noses so they can be tested for the coronavirus, according to Timothy Templet, Puritan’s co-owner and executive vice president of global sales.

Those swabs are about 6 inches long. Once they have collected a sample from someone’s nose, they can be used with portable testing machines that are meant to produce quick results, such as the ones developed by Abbott Laboratories, a company with a Scarborough factory.

Puritan is already able to produce about 20 million per month of that particular kind of foam swab in its Guilford facility. “It’s going well,” Templet said of the expansion. “The company is growing.”

Puritan makes a number of other types of medical testing materials, including longer swabs with flocked tips that can also be used to test for COVID-19. It also produces the vials filled with chemicals — known as transport media — into which the swabs are placed before they can be taken to a laboratory.

In total, the company makes more than 1,200 different types of swabs and collection devices, and it normally produces over 12 million swabs per day, according to a company blog post late last month. The company had about 300 workers in March and has since hired at least 30 temporary staff.