As temperatures cool, interest in Millinocket marathon continues to grow 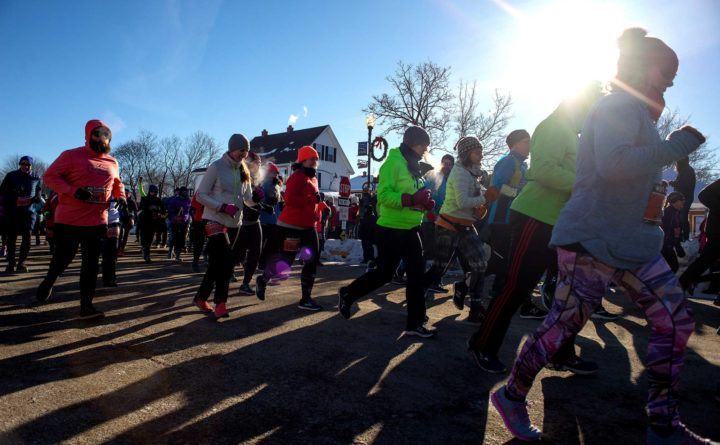 As the temperature chills down to reflect the coming of winter in the Katahdin region, interest in a sporting event in the area that defies those conditions continues to grow.

Runners from 39 states and three Canadian provinces comprise a record field of 2,301 pre-registered entries for the fifth annual Millinocket Marathon and Half-Marathon, set for 10 a.m. Saturday from Veterans Memorial Park in the Magic City.

“I don’t know what to attribute it to,” race founder Gary Allen said. “Millinocket Magic I suppose!”

How many of this year’s runners complete the 26.2-mile marathon or 13.1-mile half-marathon in the shadow of Mount Katahdin isn’t necessarily as important to Allen and others involved in staging the races as their spending habits during their visit to northern Penobscot County.

Allen, an entrepreneur and ultra-distance running veteran, created the Millinocket races — which require no entry fee — in the aftermath of area mill closings with the hope of providing an economic boost during a slow time of year before the winter snowmobiling season takes off.

Recent editions of the event have drawn waves of runners, their families and friends to the area, filling local restaurants and motels.

They come not only in appreciation of the cause and the uniqueness of participating in a marathon or half-marathon amid winter-like conditions, but some are also motivated by the fact that it serves as a qualifying event for the Boston, New York City and Chicago marathons as well as the U.S. Olympic Marathon Trials.

As the Marathon and Half-Marathon have grown, so, too, has activity surrounding the races.

One featured event scheduled for Friday is a benefit dance-concert featuring former Boston Red Sox pitcher Bronson Arroyo and his band from 8 to 10 p.m. at the Elks Lodge in Millinocket.

Arroyo’s drummer, Dave Becknell of Florence, Kentucky, is a Millinocket Marathon veteran who encouraged the band to make the trip north for the cause.

An artisan fair, a spaghetti and pancake dinner, and a parade of lights also are on Friday’s schedule, with race day parties and an ugly sweater party among the events surrounding Saturday’s races.

There’s also now a song dedicated to the event, “Run Millinocket,” written by Nashville, Tennessee, singer-songwriter Jennifer Schott. Schott is in this year’s marathon field and during the weekend is expected to perform her song,

And the Millinocket race and its sister event previously created by Allen, the Mount Desert Island Marathon held each October, now have their own beer, as the Baxter Brewing Company has used such Maine ingredients as blueberries and spruce tips to create the “Sea to Summit” lager.

As for the races, Mulcahy is the defending women’s champion as well as the only runner to compete in all four previous Millinocket Marathons.

The teacher and coach at Fort Kent Community High School ran last year’s event in 3 hours, 21 minutes and 4 seconds, but that effort came just six days after she qualified for the 2020 U.S. Olympic Marathon Trials with a 2:44:28 clocking at the California International Marathon in Sacramento, California.

Derrick Hamel of Newmarket, New Hampshire, is the defending men’s marathon champion in 2:40:25, while 2018 Millinocket Half-Marathon winners were Bartholomew Rust of Bates College and Croton-on-Hudson, New York, in 1:13:18 and Christine Hein of North Yarmouth in 1:27:38.

And by the way, all of Saturday’s runners are expected to face sunny conditions, a high temperature of 23 and a further cooling wind ranging from seven to 10 miles per hour out of the northwest, according to the National Weather Service office in Caribou’s website.