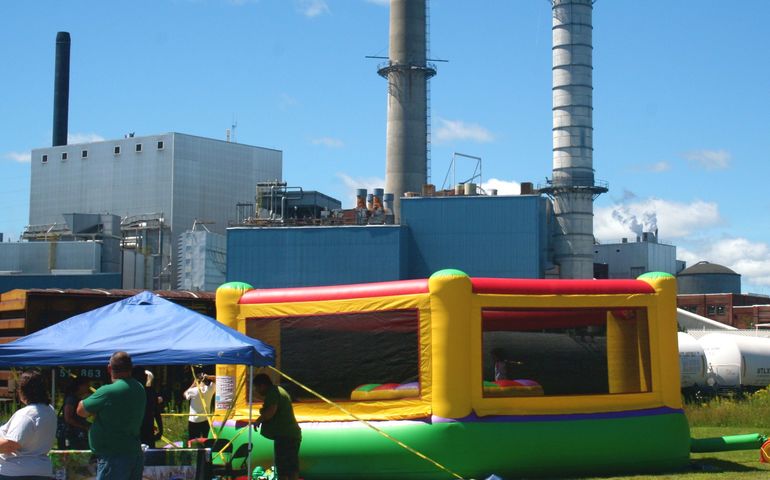 Bucksport’s transformation from a dying mill town to a magnet for new businesses, residents and visitors is a tale of planning and partnerships.

That was the message from the town’s manager, Susan Lessard, in a virtual presentation Monday hosted by the University of Maine’s Senator George J. Mitchell Center for Sustainability Solutions.

The talk was titled “The Town that Refused to Die,” echoing a 2018 article of the same name published by Yankee magazine.

With the loss of 40% of its tax base and hundreds of jobs after the closure of the town’s biggest employer, the Verso Corp. paper mill, in December 2014, many people thought Bucksport would never again thrive commercially.

Verso shut the mill in December 2014 and sold it to AIM Development, a subsidiary of the Montreal-based metal recycling firm American Iron and Metal, the following month. The state Department of Environmental Protection granted a demolition permit to AIM in September 2015.

Courtesy / Town of Bucksport Bucksport’s location on the Penobscot River and as a regional center is considered a key factor to the town’s ability to shift from being a dying mill town to a community that attracts new businesses, residents and visitors.

In 2015, Lessard said, the community was coming to grips with the loss of the mill and working to identify a path forward.

The closure cost nearly 500 jobs, 279 of them held by Bucksport residents. It caused the loss of 40% of the town’s’ tax base.

A slew of local actions followed. The town updated its comprehensive plan to reflect the loss of the mill, reviewed its services and took money-saving actions such as department restructuring. Residents started a new organization called Main Street Bucksport to promote downtown businesses. In 2016, the community embarked on a two-year grassroots project, through a program called “Community Heart and Soul,” to compile observations about the town’s culture and future. Outcomes included collaborations between organizations for infrastructure and events projects.

Since 2015, the town has won $2.5 million in grants for planning and improvements to the waterfront and downtown, fire and EMS equipment, solar and broadband development, and more.

“The town has been very successful in applying for grants,” Lessard told Mainebiz in a phone interview. “I think it comes back to the fact that most funders want to find a place that’s done their homework.”

By early 2020, 12 businesses had opened downtown, and the number of event attendees was on an upswing.

In 2014, at the time the mill closed, the downtown had numerous vacant storefronts. Real estate sales were slow and prices were depressed.

But things turned around. By the eve of the pandemic, every storefront was filled with restaurants, pubs, shops, professional offices and more, in addition to longstanding businesses. Since then, a couple of businesses have closed, but there are still far more than in 2014, Lessard noted. Businesses that existed before the mill closure stayed on.

Additionally, the real estate market is “exploding” and the school population is expanding. Bucksport currently has its lowest real estate inventory in memory, residential properties are selling quickly and demand exceeds supply, she said.

“It became clear that Bucksport wasn’t going to die, that we were moving forward,” she said.

Courtesy / Town of Bucksport Bucksport Town Manager Susan Lessard credits people, planning, partnerships and persistence for the town’s progress in revitalizing the community after the 2014 closure of the Verso Paper Mill.

Lessard recalled a 2017 visit by a Washington, D.C.-based economic development advisory team hosted by the Maine Forest Products Council. Bucksport was part of a tour of communities impacted by mill closures.

When the team arrived, she said, music was playing on Main Street thanks to a new “Wednesday on Main” events program, the waterfront was bustling with transient boaters, the town marina was full, a large private yacht was tied up at the town dock, parking spots on Main Street were full and the sidewalks were bustling.

“You could tell these people were pretty confused,” she said of the team. “They came expecting to find empty buildings and storefronts.”

A key factor in the town’s favor, she said, is its scenic location on the Penobscot River that’s central to a region with service center, recreational, educational and health care amenities and jobs represented by inland and coastal communities such as Bangor, Mount Desert Island and Belfast.

In 2017, the federal Environmental Protection Agency awarded $200,000 to the Eastern Maine Development Corp. to support redevelopment of the mill site in collaboration with the community and other stakeholders.

Under the name Bucksport Generation LLC, the plant is operating as a back-up to the grid under a 10-year agreement with ISO New England, Lessard explained.

Whole Oceans recently acquired the site’s last remaining parcel and is in the process of updating its plans for the aquaculture facility, she added.

One reason Bucksport was financially able to weather the mill’s closure was 20 years of planning for the day that the closure might come, said Lessard.

The town began that planning process because of its dependency on the mill for its portion of taxes, which at one time was nearly 70% of the taxes paid in the community, Lessard explained.

Over the 20-year period, she said, the town added incrementally to its surplus, reaching $8 million so there would be a cushion in case the mill closed.

During the first year after the closure, the town used $2 million of the surplus to cover the revenue lost that funded the school system. After that, the state recognized Bucksport’s lower valuation and kicked in more money for school funding. The town has maintained a prudent approach to using its funds and still has about $5.5 million left in the surplus, she noted.

The community also invested in its infrastructure during the mill years. That included a mile-long walkway on the waterfront, a performing arts center, a town-owned and -operated marina, miles of hiking trails, and sports facilities. Those helped to attract residents and businesses to the community at the time, and also helped the town recover after the closure, because they provided the types of amenities people and businesses were looking for when they move to a community, Lessard explained.

“If we had to construct a mile-long waterfront walkway now, we couldn’t afford it,” she said. “At least not to do it the way we did.”

“Bucksport has a history that predates the mill closure of people working together,” she said.

Plans on the horizon include finishing the engineering and applying for funds for a major expansion of the town dock to make it a year-round facility for boaters and small cruise ships. Also underway is fish passage construction, replacement of downtown retaining walls and marketing town-owned Main Street lot. The town will look at repopulating storefronts that became vacant during the pandemic.

“Change for us was unavoidable,” said Lessard. “But the key was not to forget where we came from.”