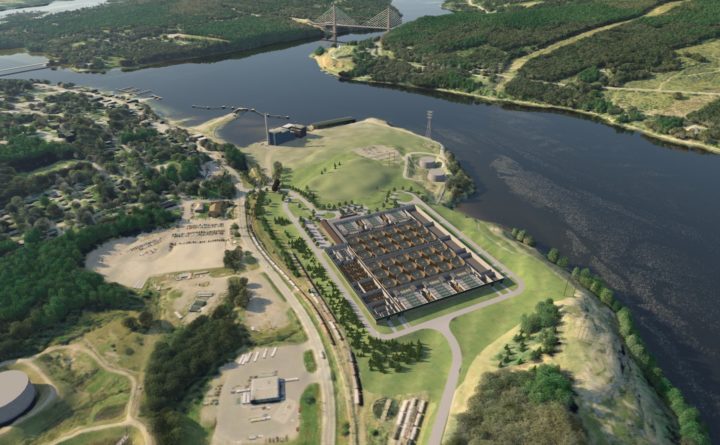 The company planning to build an indoor salmon farm in Bucksport — Maine’s second such facility — hopes to begin construction next spring.
Whole Oceans intends to file, or has filed, nine permit applications with local, state and federal regulators to build its plant at the former Verso paper mill site. The process is going well, spokeswoman Angie Helton said Thursday.
Whole Oceans was the second company in Maine planning a salmon farm when it announced the project in February, giving the former mill town hope for an economic rebirth and a foothold in a fledgling new industry.
The company originally hoped to begin site work preparation as early as two months ago, with construction to follow, but the permitting process is not finished.
“The company has been in dialogue with local regulators for two years now and has enjoyed working with [permitting] authorities, but the process just takes time,” Helton said in an email. “Whole Oceans is not in a rush — the focus is to get this right.”
Site work will begin over the winter, Helton said.
Whole Oceans is a Portland-based company planning to build initially a $75 million land-based aquafarm to raise Atlantic salmon. When complete, phase one of the project will create 50 jobs.
Whole Oceans will create hundreds of direct jobs and hopes to expand its initial $75 million investment to more than $250 million in Bucksport in a phased, multi-year plan. It will produce 5,000 metric tons of Atlantic salmon per year. The company plans over the next 15 years to produce as much as 20,000 metric tons per year.
Whole Oceans has filed a waste discharge permit with the Maine Department of Environmental Protection, DEP spokesman David Madore said.
The DEP also will review site development and general site construction permit proposals. Other applications for permits are pending or will be filed with the Maine Department of Agriculture, Conservation and Forestry, and the Town of Bucksport, Helton said.
–The Bangor Daily News