Come Tuesday, the largest vestige of Bucksport’s papermaking history will bite the dust 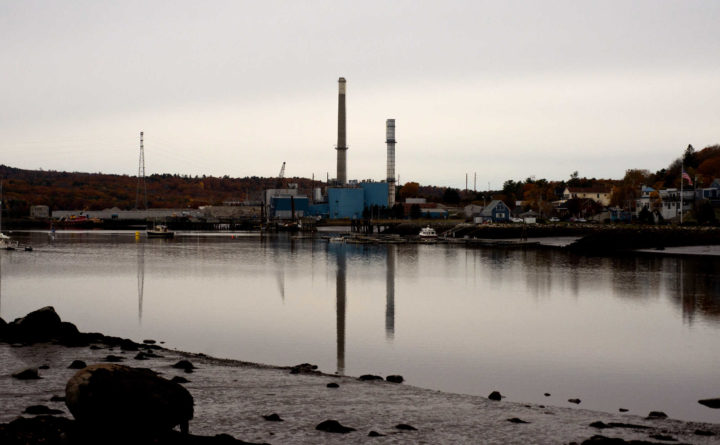 BUCKSPORT, Maine — Every time he drives over the Route 1 bridge between Bucksport and Verona Island, Danny Wentworth sees the main smokestack to the former Verso Paper mill. It’s so big he can’t miss it, and every time, he feels sad about the mill’s shutdown and the loss of his job there five years ago.

But the 58-year-old Verona Island resident also finds the sight irritating, every time — so much so that he’s glad that the big ugly thing will finally be knocked down for good on Tuesday.

“It’s an eyesore,” said Wentworth, who was a machine tender at the mill and is now a production team leader at St. Croix Tissue in Baileyville. “I’m over it, and it’s great the town is moving on as well.”

The largest vestige of Bucksport’s 90-year papermaking history, the stack to the mill’s No. 8 boiler, will be razed between 6 and 10 a.m. Tuesday. Town Manager Susan Lessard invites anyone who wants to watch the demolition to go to the Fort Knox State Historic Site across the river from the mill. The town will cover the admission fee, Lessard said.

“That mill was the heart and soul of the community and many families here for these generations,” Lessard said. “To have an event to memorialize the ending of that is, I believe, important.”

Site owner American Iron and Metal is razing the stack to make way for what Bucksport hopes will be the next 90 years of large-scale employment ― a $180 million Atlantic salmon indoor farm. The company behind the land-based aquaculture operation, Whole Oceans, expects to break ground next spring.

The view of the mill site is excellent at Fort Knox. Having people gather there will hopefully stop them from jamming Route 1 or trying to get onto the mill site, said Richard Rotella, the town’s community and economic development director.

A stack removal at another paper mill town, Millinocket, drew huge crowds when it happened five years ago. People stood on streets and in backyards seemingly stunned as they watched it happen, saying that it closed the book on the town’s papermaking history.

Former Verso workers have had a lot of time to move on, said Jim Duplessis, a retiree who worked for more than 20 years at Verso in the purchasing, accounting and personnel departments.

“Maybe they’re ready for something to move on. So I mean, for a long time, they’re just looking at that mess that’s out there,” Duplessis said. “And I think once you start doing something with that site, that’s going to make a difference.”

“I hate to see it happen, but things move on,” he added.

The loss of the stack in Bucksport likely won’t be the gut punch it was to Millinocket, said Wentworth, whose family worked at the Bucksport mill for four generations.

“Bucksport people were becoming scarce toward the end,” he said.