Cut off from family and friends, Maine sober house residents celebrate Christmas together 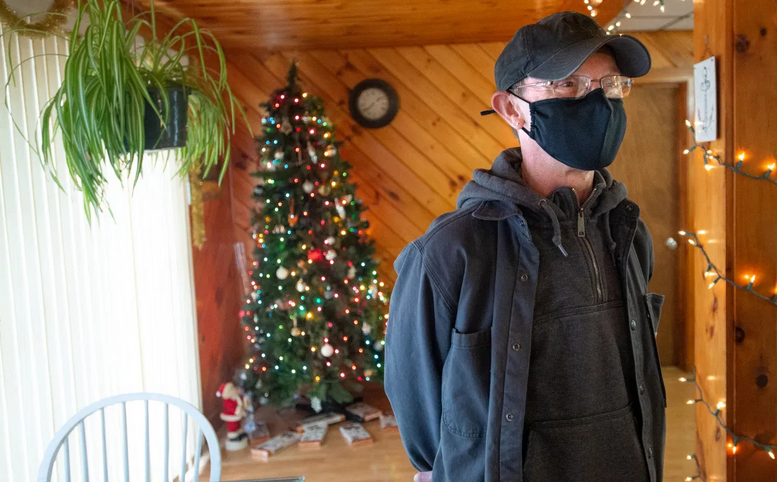 Peter Kealy spent eight of the past 10 Christmases behind bars in Massachusetts.

This year, Kealy, 42, who goes by the nickname Pat, planned to mark the holiday at a sober residence in Bangor with other men struggling to maintain their sobriety.

“This year, I hope to make new holiday traditions with people who are sober and caring,” he said.

The holiday can be a difficult time for the newly sober, who often have cut ties with their families and been cut off from friends, according to James Rickrode, who manages more than half a dozen sober residences in Greater Bangor.

“Depression and loneliness are part of the season for sure,” he said Tuesday. “People tend to isolate themselves and we see more relapses this time of year.”

But the bonds forged while living with people who also are struggling with addiction allow sober house residents to become a family, Rickrode, 42, of Bangor said.

Erica Oliveira, 31, experienced that at Thanksgiving when she and the other women living at a sober residence in Brewer were quarantined because of possible exposure to the coronavirus. No one who lives there tested positive for the disease.

“We are like a family at Holyoke House,” she said. “Moving in here connected me with more people who are on the same journey that I am. Being with people who have gone through what I’ve gone through has drastically helped my recovery.”

Oliveira was in jail and federal prison for two years for dealing drugs from her home in Hermon before being released to a Portland halfway house in March 2019. She spent last Christmas there, unable to spend the holiday with her son and mother, who was hospitalized.

“This year, using isn’t even in my head,” Oliveira said. “I’m so grateful to be where I am today.”

Fresh Start Sober Living, which manages Holyoke House owned by the Bangor Area Recovery Network, was founded two years ago, when Scott Pardy purchased a former boarding house on Ohio Street with money from his retirement fund as a recovery home for men as “a grand experiment.”

Pardy, 64, who describes himself as being in long-term recovery, volunteered at the Penobscot County Jail before the pandemic struck and limited visitors. That is where he met those first residents.

“I’ve volunteered at the Penobscot County Jail for years,” he said in 2018. “I’ve seen the cycle of people being in jail, getting sober, but being released to their former environments with no safe, supportive place to live where they can maintain their sobriety.”

He also wanted to help address the growing opioid epidemic in which deaths have continued to increase.

Twenty-seven percent more people died of drug overdoses during the first half of 2020 than the same timeframe last year, according to the Maine attorney general’s office. Hardest hit was Penobscot County, which had 17 percent of the overdoses but where just 11 percent of Maine’s population lives.

To live at the houses, the men and women must be in recovery, pass drug tests, be employed or seeking employment and attend recovery meetings, counseling sessions or both.

The homes receive no federal or state funds but are able to accept private donations. They also have received grants from the Eastern Maine Development Corp. for upgrades and repairs.

In all, Fresh Start Sober Living can house 54 men and women in recovery. When the houses are full and the residents are working, each pays $150 a week rent, Rickrode said. Making ends meet during a pandemic has been difficult because many residents work in the restaurant industry or for minimum wage.

“The goal is for people to stabilize their lives so they can live independently and support themselves,” Rickrode said. “The first group of people who moved into the Ohio Street house have been able to do that.”

Not only has the organization expanded rapidly, but it is the first in the state to have six of its recovery houses certified by the Maine Association of Recovery Residences.

About 50 recovery houses out of the estimated nearly 100 operating have been certified by the group throughout the state. It is a nonprofit organization that oversees the ethical and safety standards for recovery residences in Maine set by the National Alliance of Recovery Residences.

Recovery homes are not regulated by the state.

Rickrode said it is rewarding to see residents get their lives on track and maintain their sobriety. Some have trained to become recovery coaches. A few are attending school to become licensed professionals in the recovery field.

“Some people are making a career out of recovery,” he said. “And that’s really cool.