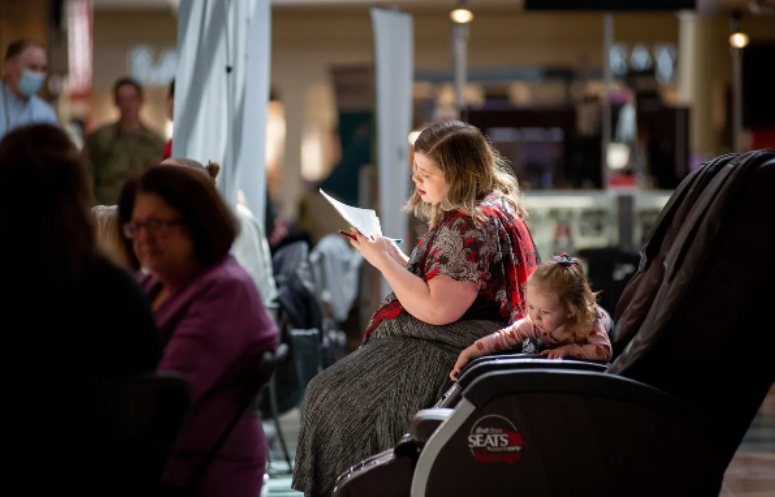 Rebecca Ladd divided her attention between filling out an application to become a child care provider and making sure her 18-month-old daughter, Isabella, didn’t wander too far away.

Ladd, 26, hopes to land a job either in child care or with the Maine Department of Health and Human Services while applying to college to become a social worker.

Do you know someone who is looking for a new job?

“I’m hoping to get any kind of job,” Ladd said. “I love kids. You can’t put a price on working with kids.”

Ladd was among about 20 people seeking jobs who turned out for the first hour of a jobs fair at the Bangor Mall on Thursday that was sponsored by the Maine Department of Labor, Eastern Maine Development Corporation and Tri-County Career Center.

In an illustration of a tight labor market in Maine, hiring managers on Thursday outnumbered job seekers. The state’s unemployment rate dropped to its lowest level in two years last month, providing job seekers the advantage in today’s job market, which the state’s pool of potential workers has yet to return to pre-pandemic levels.

On Thursday, 70 employers from Versant Power to Northern Light Health set up booths hoping to attract potential candidates for open positions in industries ranging from health care to retail to banking.

Still, Bangor-area employers were optimistic that people would drop by to express their interest as COVID restrictions lifted and the summer approached, and with it, seasonal jobs.

“People seem more willing to come out and apply this year,” said Paul Clement, an operations coordinator for Production Services of Maine. “There weren’t as many people last year.”

He and Kristy Sirois hoped to find people to apply to become stagehands, security guards, food and beverage vendors, and production crew members to fill 100 to 500 seasonal jobs for Waterfront Concerts’ summer season.

The two hoped recent concert date announcements for the Backstreet Boys and the rapper Pitbull would buoy their prospects for finding more workers.https://3cfcdf529f7e7cb9114d7b66b123c4b2.safeframe.googlesyndication.com/safeframe/1-0-38/html/container.html

“There weren’t as many concerts because we were coming off COVID,” said Sirois, a payroll manager for Waterfront Concerts. “So this year, they’re hoping to ramp up with a lot more concerts to supply more jobs for people, and get people out there.”

Marc Atwater, 15, hoped to find a part-time position for the summer as he walked through the jobs fair with his mother Cyd. It would be his first job ever.

“I was thinking maybe retail,” Atwater said. “Maybe stocking shelves at Hannaford, or as a lifeguard.”

Northeast Paving was one firm seeking seasonal employees. The company wants carpenters, truck drivers and equipment operators for its Hermon location, and has been recruiting through in-person events and mailings, said senior office manager Kristal Bubar.

The firm hopes to hire up to 50 people, “if we can find them,” Bubar said.