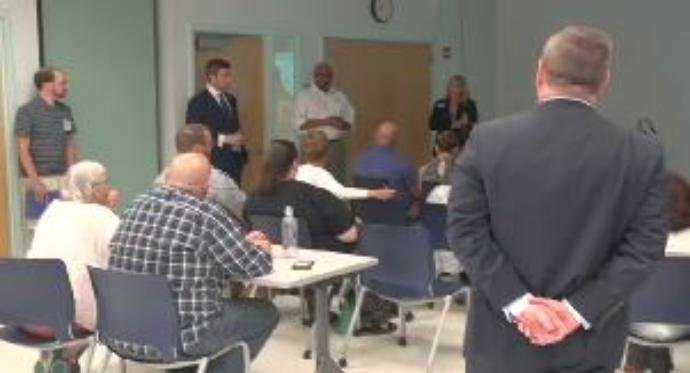 EAST MILLINOCKET, Maine (WABI) – Focusing on resources to help economic growth in the Katahdin Region was the goal of an event in East Millinocket Friday.

We were there to speak to members of the U.S. Small Business Administration and town leaders.

“There’s a lot of folks here that are working really hard, and it’s not going to be easy to overcome the closing of a paper mill the size that Millinocket had. It’s hard, but it’s going to bring out the best, and you can see it in this room with all the folks here from the towns,” said Wendell Davis, SBA Regional Administrator.

Economic growth in the region was the topic of many discussions held at the Katahdin Higher Education Center in East Millinocket.

“It really is a promising outlook for the future of this region,” said Mike Michaud.

Members of the SBA teamed up with other federal agencies like the Department of Housing and Urban Development and the USDA Rural Development to meet one on one with town leaders and community members about the resources and funding available to them like the Opportunity Zone incentive.

The USBA Regional Administrator says the focus is to drive capital to areas under served and under developed.

“There’s two prongs to that. There’s this higher level bringing capital to these areas, but also in the opportunity zone legislation, if you’re in an opportunity zone, you get special priority with a lot of federal programs,” said Davis.

A path that seems promising to some town leaders in attendance.

“We came together and we realized that there’s not a lot of difference between the eight communities. We all have similar situations. We all benefit from one community being successful,” said Peggy Daigle, Chairman of the East Millinocket selectmen.

“The towns have certainly faced a lot of problems in the past, and so it’s good to be cautious of this stuff, but I think that we’ve got good leadership in the local communities to make sure that we do things the right way and hopefully see some investment very soon,” said Kyle Leathers, an East Millinocket selectman.