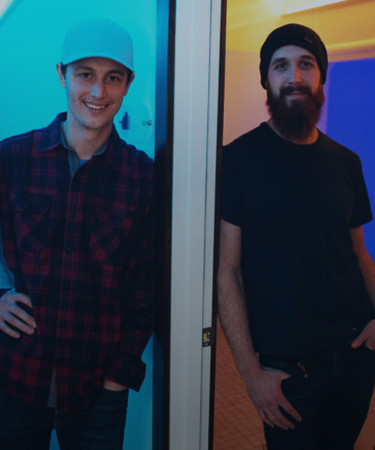 In an unassuming building just off Route 2 in Hermon there’s a new business that offers an experience that proponents say can ease a troubled mind and body and make you feel like you’re floating in space.

Float 207, which opened in October by childhood friends Roscoe Witham, 31, and Gabe Kingsbury, 28, both Hampden Academy graduates, offers float therapy: sensory-deprivation tanks, essentially, filled with salty, ultra-buoyant water that is heated to skin temperature. You get in, you lie down, and you try to let reality melt away for 90 minutes.

“When you’re in the tank, everything else just disappears,” Kingsbury said. “You might go in thinking you’re going to think about something in particular, but then your mind just empties. It’s pretty awesome.”

At Float 207 there are three 7-foot-tall float tanks, or pods, two of which are 4 feet, 8 inches wide, and one of which is 6 feet, 11 inches wide. Each is filled with 10 inches of water that has been filtered and purified three times before each floating session, into which is dissolved more than 1,200 pounds of Epsom salt. The salt makes the water incredibly buoyant, so the body is barely submerged, giving a sense of weightlessness.

Floaters can opt for total darkness and soundlessness within the pod, or they can opt for an array of colored lights, and music or other sounds of their choosing.

Floatation therapy is considered an alternative therapy and only a few scientific studies support its efficacy, but Kingsbury and Witham say benefits of floating include relaxing achy muscles, soothing an anxious mind, and helping people cope with conditions such as post-traumatic stress disorder, fibromyalgia and chronic pain from old injuries.

“I’m a pretty anxious person, and I just feel so totally at ease after floating. It’s the only way I feel like I can meditate and stop my mind from thinking about 100 other things,” Witham said. “Some people use it for joint issues. Some people use it to relax. There are lots of different ways people find that it helps them.”

Though sensory deprivation tanks were made popular in the 1960s and 1970s by the New Age movement and the psychedelic era, interest waned in the 1980s. About 10 years ago, interest in floating resurfaced, after athletes including Tom Brady and Steph Curry and actress Jennifer Lawrence publicly promoted their use of float pods, and podcaster Joe Rogan glowingly described his many experiences floating on his show.

Kingsbury and Witham first encountered floatation therapy just a few years ago. Float Harder, Maine’s first float therapy center, had recently opened in Portland, and after both tried it for the first time, they were hooked.

“I’d make a whole weekend of it — drive down, get a hotel room, go float,” said Kingsbury, who before opening Float 207 had worked in insurance for nearly a decade. “I don’t think either of us knew this would end up being our job.”

About a year ago, the pair decided that a float spa could work in the Bangor area. After doing extensive market research and looking at various locations, they landed on Hermon, at 1723 Hammond St., in a quiet, otherwise mostly industrial part of town.

“Our needs are a little different from other businesses. We can’t have too much road traffic. We can’t be in any flight paths,” said Witham, who before opening Float 207 worked as a medical marijuana caregiver. “We need total silence to have floating be effective.”

Float 207 and Float Harder are the only float spas in Maine. Kingsbury said that just three months in, he and Witham have welcomed customers from as far away as the Aroostook County town of St. Agatha, and Moncton, New Brunswick.

One 90-minute float session at Float 207 costs $65; the larger, “deluxe” float pod is $75 for 90 minutes. Float 207 also offers two infrared saunas, which are sauna-like wooden rooms that use infrared heaters to heat the body directly, rather than in a traditional sauna, which heats the air around the body. Kingsbury and Witham also plan to a hire a massage therapist and an acupuncturist later on in 2019.