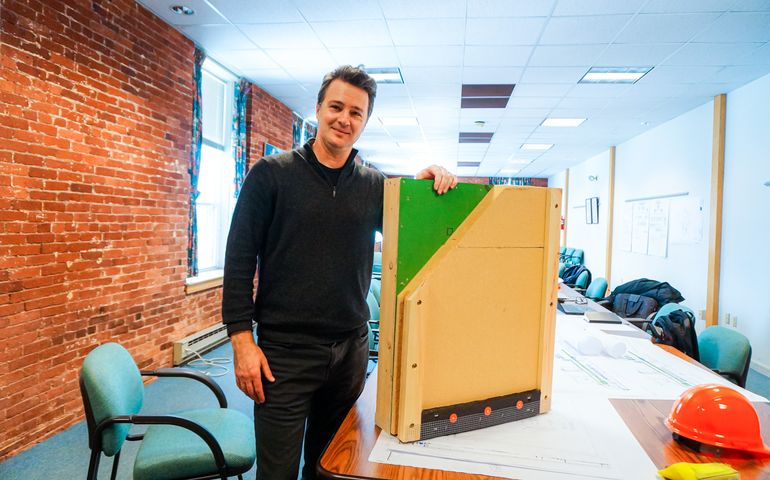 When Matt O’Malia and Josh Henry began discussing developing wood fiber insulation a few years ago, it seemed like a way to meet increasing need while decreasing carbon impact.

That discussion kicked off what they now expect to be “an incredible change in the marketplace,” O’Malia says.

More than just an environment-friendly insulation, the product is:

“It hits on every note,” O’Malia says, as he stands in the yawning interior of the vacant former paper mill GO Lab bought last year. This time next year it’ll be producing loose wood fiber insulation and in 2022, will produce batt and board insulation as well.

O’Malia sees the building industry on the brink of a seismic change. “It’s going to open the door for a huge transformation,” joining with increasing use of mass timber and combine with rising focus on climate change and the move to innovate the state’s forest products industry.

The insulation is “a simple and elegant approach to completing the building envelope,” Henry told Mainebiz in September, when he was named to the 2019 Next List.

While the first product, a loose blow-in insulation, won’t be produced until next year, customers including lumber mills and other building construction retailers, are lining up.

“Hancock Lumber is very excited to be a part of and work with GO Lab on their wood fiber insulation products,” Hopkins says. “We’re eager to have the products available to share with the building partners we work with every day.”

And more customers will come. Updates to building codes have put the insulation industry on a game-changing brink, O’Malia says.

The 2018 International Conservation Energy Code has stricter standards for continuous exterior insulation on buildings. While Maine still follows the 2009 code, Massachusetts, Connecticut and other nearby states follow the newer one.

Eventually, Maine and other states will catch up. The new codes are cold-driven — the amount of insulation needed depends on how cold it gets outside. As demand for insulation increases in New England, O’Malia likes GO Lab’s prospects.

The code change isn’t what prompted O’Malia and Henry to look into finding better insulation options, but it’s come at the right time.

Like many game-changing innovations, Timber Pure started as a “what if?”

O’Malia is an architect with GO Logic and OPAL in Belfast. As he designed high-performance buildings that require more and thicker insulation, he faced a dilemma.

Buildings designed to use less energy are beholden to insulation products that are created by processes with huge carbon impact, and they’re not biodegradable or recyclable.“The choices were unbearable,” he says.

In 2016 he and Henry, at the time a University of Maine chemist, decided to see if they could produce the same kind of wood fiber insulation that’s been used in Europe for years.

“I’m an architect, you’re a chemist — we should be able to collaborate on something,” O’Malia remembers saying.

Henry took a sample of insulation produced by Homeotherm, in Germany, to the University of Maine composites lab to see if he could figure it out.

Henry created a product, they reached out to Homeotherm for guidance, and eventually developed a business plan.

“It looked doable,” O’Malia says. “The costs are low, the market huge.”

It seemed too obvious, in fact.

“I kept asking ‘What doesn’t make sense?’” he says. “But we decided we’re going to keep going until we find something wrong. We kept going, and kept going, and there was no reason to stop.”

By 2017 they’d formed GO Lab and were thinking about location.

A first thought was at Robbins Lumber, in Searsmont, which had built a wood chip biomass plant and is owned by friends of O’Malia.

But that would’ve meant new construction for equipment as long as a football field, an expensive prospect.

In August 2017, Homeotherm called. They were shutting down one of their lines and were selling the equipment. New it would’ve been as much as $25 million, but they’d sell it to GO Lab at a discount.

That sped up the process. A flurry of fundraising began, including support from Maine Technology Institute, Finance Authority of Maine and investors.

In 2019, with financing from a consortium of state and local entities, GO Lab bought the Madison mill for $2.4 million.

“With closing on the mill and having a concrete location, people can see that this project is actually happening,” Henry said in August when the deal closed.

O’Malia says much of the focus now is on raising capital and getting the mill ready for the Homeotherm equipment, which is waiting in Germany.

“We needed a football field and we got two football fields,” O’Malia says as he stands at the end of the 200-yard long former papermaking space in the mill’s main building.

The mill, which shut down in 2016, was perfect for their needs. The equipment had been sold off and it hadn’t been closed long enough to deteriorate.

Another benefit is the area workforce, some of whom are already working for GO Lab.

The mill will run three shifts and employ about 130 once it’s producing all three products in 2022.

GO Lab started as a way to solve a problem, and now O’Malia is excited about the opportunities it’s creating.