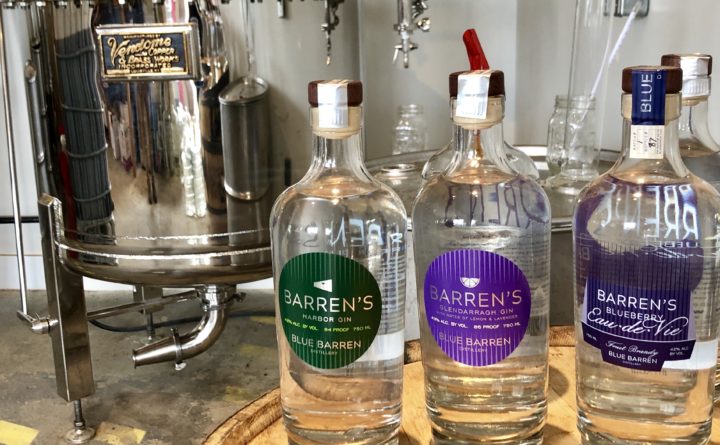 The idea behind Blue Barren Distillery came three years ago the same way a lot of great ideas come about: over a beer at the local pub.

One day after work, Jeremy Howard, a seventh-generation blueberry farmer from Hope, was having a beer at the Drouthy Bear, a Scottish pub in Camden owned by his friend Andrew Stewart.

At the time, Maine’s blueberry farmers were facing a 26 percent price drop in the market. Howard, like other Maine farmers, was wondering how he could keep his family’s business, Brodis Farm, viable with decreasing profits.

Stewart had an idea. “If blueberries are so cheap, why don’t we just distill them?” he asked Howard.

“It’s one of those conversations you have over a beer where usually the next day you move on like nothing happened.” Stewart said. “But we kept coming back to it.”

This month, they debuted their passion project to the public when they opened a tasting room just outside of their small distillery on Camden’s waterfront. In addition to the eau de vie, Blue Barren Distillery is also producing three types of gin, with plans to add rum and a collaboration with Orono Brewing Company to its list of offerings within the next few years.

While it’s not a commonly found spirit in the U.S., Stewart, who grew up in Scotland, said eau de vie is a very common product in Europe. It’s typical for European fruit farmers to turn whatever fruit doesn’t sell into cider. If the cider doesn’t sell, it’s distilled into a spirit, Howard said.

Being in Maine, turning blueberries into a spirit just made sense, the duo said. Because grapes are not as common in Maine, Stewart said they like to think of blueberries as the “grape of Maine.”

Blueberry wine and beers are common in the state’s craft alcohol market. But there isn’t much being offered for blueberry spirits, Howard said.

“We just thought this could be a fun and exciting way to use blueberries,” Stewart said. “We really like the idea of using Maine’s native fruit to make a regional product.”

To make the first batch of eau de vie, 30,000 pounds of Brodis Farm blueberries were distilled and then aged in glass bottles for three to four months. If the product was aged in wooden barrels for a longer period of time, it would become the dark product that people think of when they picture brandy.

Blueberries have a low sugar content, and no sugar is added during or after the fermentation process, so Blue Barren’s blueberry eau de vie has a dry yet fruitful taste, rather than being a sweet blueberry product.

“The eau de vie is the soul of this distillery and the reason we started it,” Stewart said.

Currently they are having to outsource ingredients for their gin products. But Howard and Stewart intend to source the juniper, lemongrass and fennel from Maine farms within the next year.

To further make use of their location, Stewart said they are working on finding boat captains who keep their vessels in the Carribean during the winter so they can get access to molasses from a variety of sugarcane plantations in order to make their rum.

“We’re right on the harbor. It’s a way of using our location and giving meaning to the product that we’re making,” Stewart said. “Also, boat people like rum.”

On a recent Wednesday, Howard was working on a beer brandy that is being made in collaboration with Orono Brewing Company. The two-way collaboration will have OBC producing an imperial stout brewed with Brodis Farm blueberries. Once that beer is produced, some of it will go to Blue Barren Distillery, where it will be turned into beer brandy that is aged for three years. Once both products are finished, there will be a joint release of the beer and the brandy.

While neither Stewart nor Howard had experience in distilling prior to launching Blue Barren Distillery, the distillery has been serendipitous for both parties.

Growing up in Scotland, visiting whiskey distilleries was a hobby for Stewart. His pub, the Drouthy Bear, serves more than 140 varieties of whiskey. The possibility of getting involved with a distillery project was always in the background for Stewart, he just didn’t think it would be distilling blueberries.

Since they had their original conversation three years ago, the price of blueberries hasn’t gotten any better. For Howard, Blue Barren Distillery is a way to ensure the future of his family farm by making a value added product from their blueberries.

“We want to be the community’s farm distillery,” Howard said.