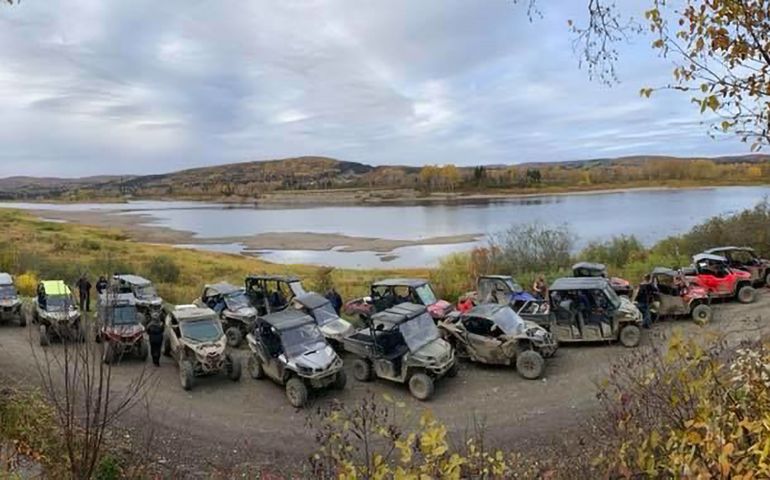 The Dennysville Snowmobile & ATV Club has proposed the development of a trail into the town of Lubec, saying the local economy can greatly benefit from Washington County’s growing all-terrain vehicle and snowmobile economy.

The months-long discussion began at the Lubec select board’s Oct. 31 meeting, when selectmen heard from Derek Brown, president of the 130-member club. His proposal would create a trail from Whiting into Lubec, a distance of about 11 miles.

Maine’s ATV trail system currently covers about 2,300 miles, Brown said, of which 25% are in Washington County.

“It brings a tremendous amount of commerce to Downeast Maine,” he said.

ATVers and snowmobiler activity in places like Jackman, Houlton, Presque Isle and Fort Kent is the equivalent of summertime in Bar Harbor, according to Brown.

When the Downeast Sunrise Trail from Eastport to Perry opened, it was expected to see perhaps several dozen ATVs per day. Instead, “any Saturday you can count 100 to 200,” he said. “It is bringing people from all walks of life to our area. And they are spending money.”

Most ATVers are older people. “And those people spend money,” he said. “They go to restaurants, they go to shop.”

Brown said that on a trip to Calais with a dozen of the club’s members, the group spent over $1,000 in food and gas on a Sunday afternoon.

ATVers, he said, enjoy the sport not just for the trail rides but to enjoy stops in communities along the way, where they spend money at restaurants and shops. “I think there’s a tremendous opportunity for the town of Lubec,” he said.

Speed zones would be 25 mph or, in some areas, 15 mph. The club, which has operated since 1998 and already maintains 55 miles of trails, would self-police the new path.

“If Jason is sitting on his porch at 3 o’clock in the afternoon, and somebody rides by on the main drag with no helmet doing a wheelie, he’s going say, ‘Cut that out,’” Brown said.

Once an ATV trail is created, he added, it also serves as a multi-use trail for hikers, bicyclists, cross-country skiers and the like.

Daniel Wagner, vice chairman of the select board, noted it would take time to get citizen input and map out potential trails in Lubec.

Brown said there are a few existing known trails in town. The process would require getting permission from private landowners to access their land.

“It’s not, ‘Can I go through the back 40?’” Brown said. “It has to be done right. It’s  very methodical and controlled. It will take time. If we say in the next month or two, “Yes, we want to do it,’ it would be late next summer before it would come fruition. It’s a very lengthy process.”

He’s looking for the town’s OK before the club approaches landowners to find potential routes and requests permission from the Maine Department of Transportation to cross state roads.

At its Nov. 13 meeting, the select board moved to allow the club to move forward on its proposal to find potential trails that would connect Whiting with Lubec by talking with property owners.

“Business-wise it would be a good thing to do,” said one resident in the audience.

The board agreed to write a formal letter to the club, requesting a progress report as things moved along.

There was further input from the public at the board’s Dec. 23 meeting.

The board agreed that Stockford Park, just outside the downtown core, might make an appropriate terminus for the trail.

But selectman Jason Evasius said that location isn’t definite, and that many businesses downtown don’t want to miss out on revenue that ATV riders might generate.

“We want our businesses involved,” said one resident in the audience, adding that there are numerous questions still to be discussed around aspects of ATV activity such as noise.

Other residents and business owners said the ATV economy should not be dismissed, since it’s a growing form of recreation for families. In addition, they noted, a trail into Lubec would bring other types of users, such as bicyclists, who would patronize local businesses.