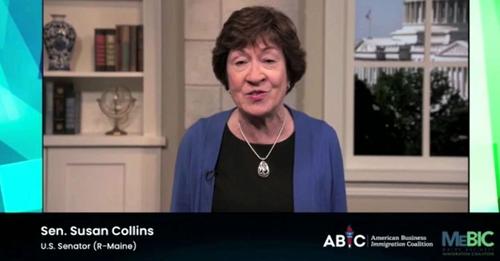 Hosted by MeBIC and its partnerthe American Business Immigration Coalition (ABIC), Growing Maine – Bipartisan Immigration Solutions 2021 was a clear call to Maine’s Senators to lead the charge for bipartisan Senate action this summer on three common-sense immigration solutions whose counterparts have already passed in the House of Representatives: the Dream Act, the companion bill to the Farm Workforce Modernization Act, and the SECURE Act.  Each proposal recognizes immigrants’ vital and growing contributions to Maine’s economy and communities and is critical to addressing our state’s demographic challenges.  For a link to the recording click here.

The broad array of speakers included:

The House has acted and the ball is now in the Senate’s court.   The speakers above eloquently laid out why Maine needs immigrants, and  immigration reform.  It’s time for the Senate to act.

Hear about how immigrants are essential for strong Maine communities and to have a growing economy in the recording of the event here.