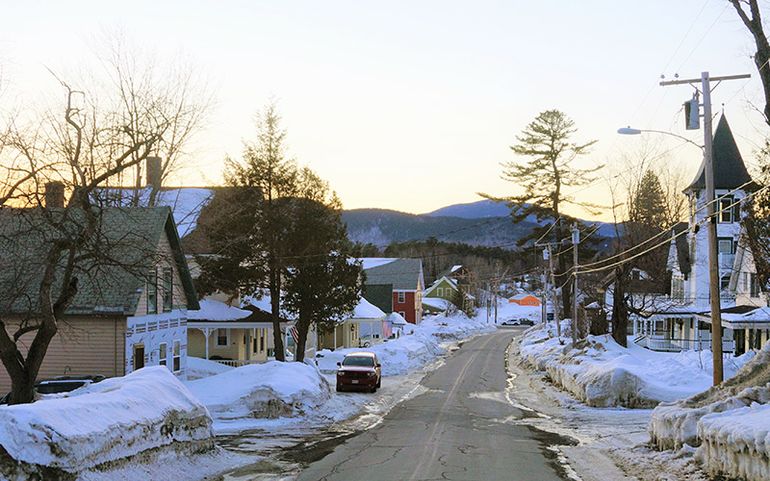 A website recently dubbed Dover-Foxcroft “the most boring town in Maine,” but home buyers apparently haven’t gotten the memo.

The algorithm the designation was based on — population, average age and “things to do” — may have pushed the town of 4,000 to the top of the site’s list, but another number tells a better story for Piscataquis County: Sales of single family homes rose 21.5% in 2018, the highest county increase in the state.

A combination of factors, including a quietly improving economy across the county, which has a population of 16,900, and the state’s focus on destination tourism, combined with the state’s second-lowest median home price, have made Piscataquis County an under-the-radar real estate hot spot.

Christopher Winstead, executive director of the Piscataquis County Economic Development Council said another feature of the county, being humble, plays a part.

There are a lot of good things going on in the county from an economic development standpoint.

“The only thing we could probably do a greater job of is spreading the word,” he told Mainebiz Tuesday.

A steady increase in sales 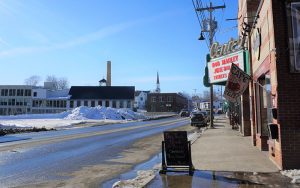 Downtown Dover-Foxcroft, with the Center Coffee House on the lift and the redeveloped Mayo Mill in the background.

Piscataquis County’s 16,900 residents are spread across the bottom half of the county, from the Milo and Brownville area to the east, to Greenville, on the shores of Moosehead Lake, to the west. The vast northern two-thirds of the county are taken up by Baxter State Park, the Allagash Wilderness Waterway, the 100-mile Wilderness, and other sparsely inhabited areas.

In Maine, home sales increased 1.3% in 2018,and more homes were sold last year than any other year since they started keeping track. Median sales price was also the highest since record-keeping began, the Maine Association of Realtors reported in January.

In Piscataquis County, sales were spread across the county’s 17 towns, as well as plantations and unorganized territory — for instance Greenville had 24, while Dover-Foxcroft had 16.

The population is small enough that the county-wide increase wasn’t enough to make Maine Life Real Estate’s “Hottest Towns” list, which tracks home sales trends every year. Rob Edgerley, who compiles the list, tracks towns and cities that have 130 or more transactions.

Still, Edgerley was impressed with the county’s increase.

“That’s a sign people have confidence in the economy,” he told Mainebiz last month.

Out of the house, on to the trail 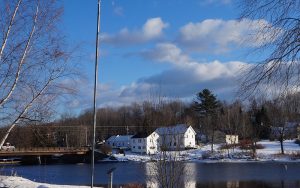 Home on the lakes, like in Sebec, in Piscataquis County, aren’t the only ones popular with vacation home buyers.

Edgerley speculated many of the county’s sales may be second homes for buyers.

Many are, but they aren’t traditional vacation home sales, said Donna Jones, owner of Dewitt-Jones Realty in Milo.

Jones said that while many buyer are out-of-staters looking for a second home, they are opting for houses that are more traditionally primary homes, not the expensive lake shore ones.

She said while she can’t pinpoint a specific reason house sales increased so sharply in the county, that’s something she’s seeing more of.

“People call and say they want to walk out of the house and be right on the [snowmobile] trail,” she said.

The homes in the county are old — 56% of its inventory was built before 1980, according to the association.

Piscataquis County’s sales numbers come despite a low inventory and little new construction, most of which is in the Greenville area, on Moosehead Lake, across the county from Milo.

Jones said that while her agency does have a couple new construction listings, skyrocketing construction costs are keeping the numbers low.

Winstead said, though, there is a lot of investment in renovating older homes. 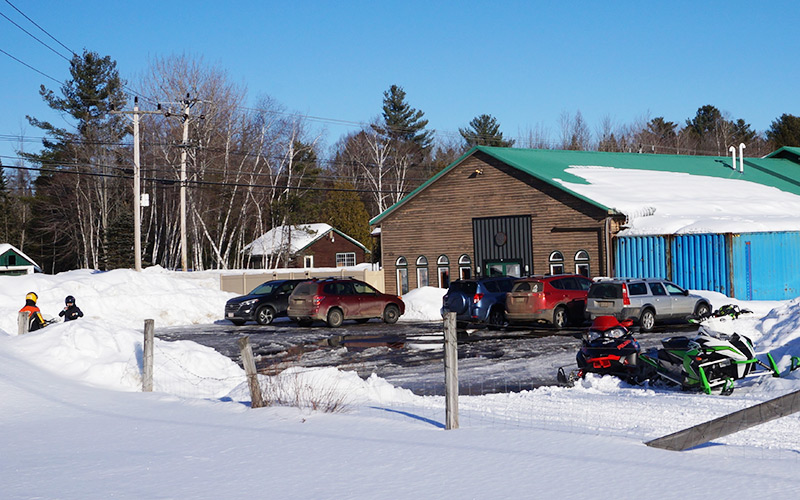 The Bissell Brothers new taproom in Milo opened last year, and is on a snowmobile trail.

While some longtime industrial businesses no longer exist, newer ones are going strong and creating jobs and the economic activity that comes with that, Winstead said.

Mark Awalt, president of JSI Store Fixtures, in Milo, agrees. In 2001, the business, which started in 1991 acquired the Dexter Shoe factory, which had recently shut down.

JSI now employ about 140 full-time workers, and also hires temporary workers in season in Milo, Awalt told Mainebiz. It has a total of about 300 employees overall, including in Utah, Quebec and Bangor, where it opened a refrigeration fabrication division five years ago.

Most of the Milo employees live in the area and Awalt said, even though the company has expanded across the continent, the Milo factory is “the workhorse of the company.”

He said increases in employment at the factory, which was expanded from 60,000 to 80,000 square feet in recent years, has had a direct impact on the Milo-area economy and business openings..

Recent business developments in town include this year’s expansion of the Tradewinds grocery store. The company, which sells Hannaford products, bought the Farmer’s Union IGA when the store closed in 2011. Late last year, the store doubled its size.

The Greater Milo/Brownville Area and Points North Visitor Center on Route 11, north of downtown, donated by Tom and Nancy Harrigan, opened in May, the fifth building on a site that includes a new Kiwanis Club, a museum and education center.

Elaine Poulin, owner of Elaine’s Basket Cafe & Bakery on Main Street, expanded into a second building in 2016, and besides the cafe, sells pastries to more than 30 retail locations in the state.

Some 20 miles west, in Guilford, the county’s largest employer, Puritan Medical Products, a maker of wood products for both the food and medical industries, is celebrating its 100th anniversary. All of its operations are in the town of 1,444. In 2011, it underwent a major expansion and has been steadily adding employees. In 2011 it won a Governor’s Excellence Award for “Fastest Growing Business in Maine.”

It began by making toothpicks, but has adapted, adding Puritan Medical Products in 2002, and recently rebranding. 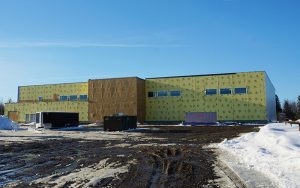 A $5 million ice arena in Dover-Foxcroft, a project of the Libre Foundation, is due to open this summer.

All of those are growing, adding to the economy, he said. He said JSI and Puritan’s expansions and hiring have had a big impact.

Winstead cites other economic development in the area:

Central Maine & Quebec Railroad has upgraded the Derby rail yard, which it took it over in 2015 after the Montreal, Maine and Atlantic Railroad went bankrupt after the 2013 Lac Megantic, Quebec, derailment and fire that killed 47. In 2017 CMQ renovated the 25,000-square-foot machine shop in Derby, investing $7 million in a center that now cleans and maintains railroad tanker cars. When the company bought the railyard there were eight employees, Winstead said. Now there are 20.

The Libre Foundation has not only invested in houses and business in Monson, forming an arts community, but is also building a $5 million ice area in Dover-Foxcroft that’s expected to open this summer.

The Appalachian Mountain Club has invested $69 million in Maine, including Piscataquis County, in the last two decades, including opening a new visitor center in Monson last year.

The state’s increased focus on destination tourism has benefited the county, which is home to Baxter State Park, the Gulf Hagas gorge and natural area, the southern end of the Allagash Wilderness Waterway, and countless lakes and rivers and borders borders Katahdin Woods and Waters National Monument. The effort by state tourism officials has already shown an increased number of visitors to the Maine Highlands region, of which Piscataquis County is a part.

An increased focus by Gov. Janet Mills’ administration on improving broadband connectivity as a statewide issue, rather than one counties have to solve themselves, Winstead said.

Winstead pointed to the development of the former Mayo Mill in Dover-Foxcroft by the Arnold Development Group, as an illustration of how big things can happen. The developer, Jonathan Arnold, of Kansas City, saw the possibilities and worked with the town and a number of other investors to redevelop the mill, once the economic foundation of the region, which was vacant and in disrepair.

The development of the mill began in 2012 and opened in 2015. The mill has retail and offices on the first floor and residential on the top two floors, and because it is connected to the “three-ring binder” fiber network, it’s attracted residents, including some who work from home because of the good connection.

Residents include retirees from both the area and away, as well as young working people.

When the mill development project was underway, the Center Coffee House opened nearby on Main Street, in 2014. Other businesses have followed.

“There are a lot more people downtown now,” Winstead said. “It’s nice to see people walking to the grocery store, or to have dinner.”

Not boring at all 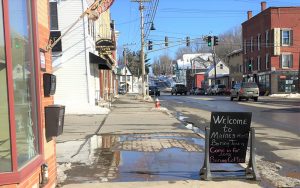 A sign at Center Coffee House on Main Street in Dover-Foxcroft makes light of the town’s “most boring” designation.

The recent internet list that named that Dover-Foxcroft is Maine’s most boring city gets a laugh from those who live there.

The Center Coffee House had a sign out in front last weekend that made light of the designation: “Welcome to Maine’s most boring town. Come in for some boring coffee.”

Jones, the real estate broker, said designation didn’t make much sense. She lists the things to do in the Milo-Brownville area: cross-country skiing, snow-shoeing, snowmobiling, restaurants.

“And there’s even more to do in the summer,” she said — hiking, Mount Katahdin, Baxter State Park, the lakes, the rivers.

“It’s a great place to raise kids,” she said. “The schools are good, and they can get outside to play.”

She said that the increase in home buyers she’s seeing reflects that.

“I guess it’s boring if you want to go the mall,” she said.

Winstead agreed, pointing out that Foxcroft Academy in Dover-Foxcroft, where Regional School Unit 68 students go to high school, is a lure for people who want good schools.

It’s not just out-of state vacation home buyers, but also people who work in Bangor and commute from PIscataquis County, including from Greenville, about an hour’s drive.

He sees the popularity of the county as a place to live and own property in continuing, particularly once broadband access increases.

“If you could work anywhere in the world [from home],” he said. “Why wouldn’t you live here?”