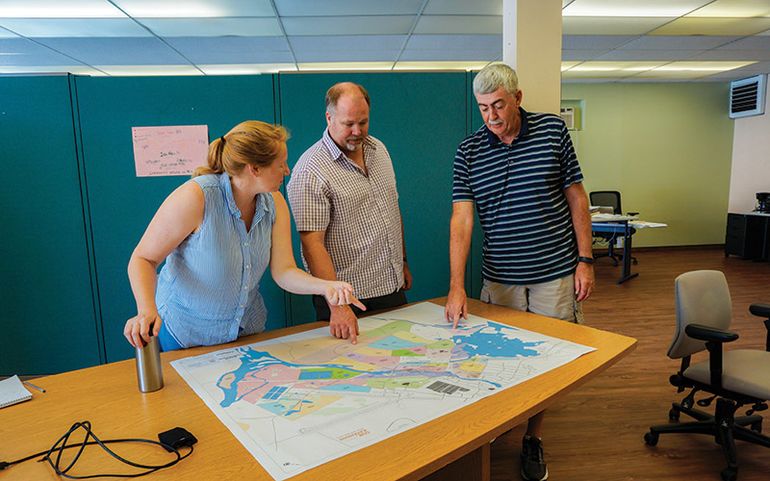 Developers of the former Great Northern Paper mill site in Millinocket will get federal aid to implement infrastructure improvements that will help them establish an industrial park.
The U.S. Secretary of Commerce’s Economic Development Administration is awarding a $5.3 million grant to Our Katahdin of Millinocket to revitalize the former paper mill site.
The expectation is that the industrial park would create 115 jobs and spur $205 million in private investment, according to an EDA news release. The grant will go toward infrastructure improvements needed to support wood-product manufacturing and high-tech data processing businesses.
The investment will fund construction of water, sewer, roadway and electrical infrastructure. Electricity will come from an existing hydroelectric plant.
Steve Sanders, Our Katahdin’s director of mill site redevelopment, told the Bangor Daily News the restoration of water, sewer, roadway and electrical services to the former mill site is a critical step in the volunteer-driven nonprofit organization’s efforts to redevelop the mill.
“We need this [grant] to make this a turnkey operation for our tenants,” Sanders told the newspaper, citing LignaTerraCLT Maine, which announced in February it would build a $30 million 300,000-square-foot cross laminated timber production plant, bringing 100 jobs to the industrial park.
Sanders told the BDN that biorefineries, wood pellets manufacturers, nanocellulose researchers, aquaculture developers, data centers and food production specialists are among other businesses that have expressed interest in moving onto the site.
Our Katahdin is a volunteer-driven nonprofit organization working to promote community and economic development in the Katahdin region.
“Our No. 1 goal is to bring back jobs to the area,” Our Katahdin President Sean DeWitt said in a news release. “We knew that a major investment in the core infrastructure was needed to attract companies and further investment. We are grateful to our dedicated staff and voluntary consultants who have developed a site plan that utilizes the legacy assets and allows for development of the greenfield site.”
The award is contingent on Our Katahdin resolving an inherited $1.4 million IRS lien on the site, according to Our Katahdin’s news release, which added that the organizationhas been mired in the lien negotiation process with the IRS for over 18 months without success.
“We need to find resolution to the IRS lien now, so we can move the site, this EDA grant and the Katahdin region forward” Sanders stated.
The Millinocket project is funded under the Bipartisan Budget Act of 2018, in which Congress appropriated to EDA $600 million in additional Economic Adjustment Assistance Program funds for disaster relief and recovery.
-Mainebiz