Ski redevelopment proposal near Moosehead Lake offers promise for some, concern for others 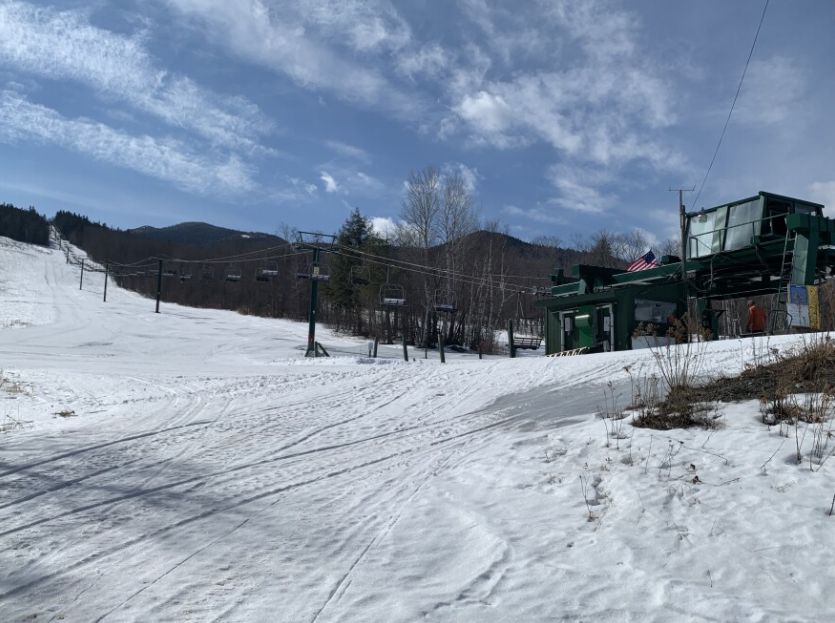 Below is a transcription of the audio segment. To hear the recording, visit Maine Public.

For more than three decades, Big Moose Mountain outside of Greenville, has clung to its reputation as a family-friendly ski area even as it fell into disrepair.

The nonprofit Friends of the Mountain has been collecting donations to keep one chairlift running and the lower part of the mountain open to skiers and snowboarders four days a week during the winter.

Once upon a time there was more to offer.

“We worked year-round,” said Greenville town clerk Roxanne Lizotte, who spent 10 years working on the mountain. “Back then it was a four-season resort.”

She remembers when groups would come from Boston and Canada. They came to ski, but also to attend conferences and go hunting, rafting and square dancing.

“I know it sounds funny, but I mean that’s what we dealt with,” she said. “They’d dance in the dining room, there was a big dance floor out on the front. And they would dance, and then in the fall we did a lot of the trips up for the foliage.”

Other longtime residents such as Craig Watt, the owner of the Indian Hill Trading Post and Shop-n-Save, also remember the way the mountain “used to be” — and how it fueled the local economy.

For Watt, the mountain was a big part of his family’s business.

“At one point in time we were into ski rentals and helped provide things that people were looking for to ski at the mountain,” he said. “That went away as the mountain went backward.”

Things changed when a new owner, Jim Confalone, took over the operation in 1995.

“We’ve had an absentee owner of that area for quite a while,” Watt said. “Unfortunately things happened and he choose not to continue to invest in it or reinvest in it when it needed to be.”

Then in 2004 a ski lift failed, injuring four people. The state sued Confalone in 2016, and the lawsuit is still ongoing.

“It could become a real New England-wide destination,” said Lee Umphrey, president and CEO of the Eastern Maine Development Corporation, which gave the developers initial loans worth about $400,000. “What we’ve seen in Maine with Saddleback and Sugarloaf, their growth and their success, I think Moosehead could really create a trifecta of ski destinations in Maine that would create jobs and boost the economy.”

Many residents, businesses and town officials seem united around the idea of restoring the ski resort.

Chris King, secretary of the Moosehead Region Futures Committee, said the group supports the restoration of the ski area but wants to ensure residents have enough information to prepare for the changes that will inevitably come.

“Everybody in town, well not everybody, but most people in town would like to see these kinds of things happen,” he said. “We just don’t want to see what makes people want to come here be destroyed.”

Two decades ago, King’s group, which describes itself as a watchdog over development projects in the area, actively fought against a development plan by the Plum Creek Timber Company. The plan called for nearly 1,000 house lots and two resorts near Moosehead Lake.

The plan divided the community, and developers eventually pulled out of the project, citing the lingering effects of the 2008 recession.

For Watt, the Indian Hill Trading Post owner, it was a disappointment.

“I was pro Plum Creek,” he said. “I was firm in my stance that it was good for the area, and I still do. The things that we thought were going to happen that made people nervous, none of it happened. We haven’t seen a single resort get built. We’ve seen very little development.”

Supporters of the new development proposal say it’s different from Plum Creek because it restores an existing area that once fueled the local economy.

But some are concerned about the project’s second phase, which proposes construction of 400-to-500 new residences and a 200-slip marina on Moosehead Lake.

“Bring back the ski area, rejuvenate the ski area, make it a four-season resort, but within those confines,” said Al Manville, a wildlife biologist who splits his time between a home in Brunswick and a camp outside Greenville. “Suddenly we hear of a 200-slip marina being proposed?”

Manville and his partner, Sandy Scholar, moved to the area as retirees, drawn by the large lake’s natural beauty and the peace and quiet of the region.

“We see flashbacks with some of the things we were dealing with Plum Creek,” Manville said.

Scholar said they’re worried about pollution from speed boats on the lake, and about the effect that 500 new homes will have on the region’s existing infrastructure.

“There’s one road that goes there, and it’s a single lane in each direction,” Scholar said. “Have people have thought about the impact on the road, the fire department, the police department, sewage?”

And the project’s developers say simply upgrading the ski area won’t be enough to make the mountain profitable and thriving again. They will need the property tax revenues from the new residences to pay back a portion of the bonds used to finance phase one.

Watt said he believes questions about the development can be resolved in time. He just doesn’t want to see another project fizzle out.

The developers can’t secure the property until the Land Use Planning Commission approves the permits. That won’t happen until the commission holds a public hearing, which has not yet been scheduled.