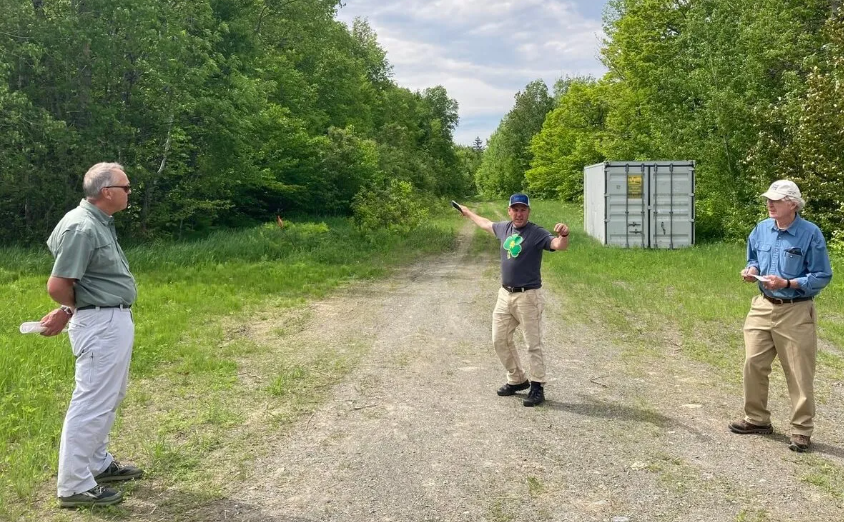 GREENVILLE, Maine — Community members and officials packing a public hearing Tuesday debated whether a proposal to redevelop a partially defunct ski area in Piscataquis County is viable enough to bring long-term prosperity to the region.

The $113.5 million year-round ski resort in Big Moose Township would include a detachable chairlift to the top of the mountain, base lodge that would function as a conference center, 63-room hotel, taphouse and restaurant, a zip-line tour ride and more, developer Perry Williams said during his presentation.

More than a year after Williams of Big Lake Development LLC filed his application for a development permit with the state, the public hearing allowed the community to weigh in on the project. Once the written public comment period closes later this month, the Maine Land Use Planning Commission will decide on the application, which details the first phase of redevelopment. The commissioners’ decision could determine, in some aspects, the future of the Moosehead Lake region and those who reside there.

“Our plan is to bring back the mountain and create a sustainable four-season outdoor resort,” Williams said, noting 1,700 acres of redevelopment. “We plan to change the name once we get local input. We haven’t decided on a new name yet.”

The proposal calls for tearing down the old hotel, lodge and chairlift on the property because they’re damaged beyond repair. Williams and his partners will keep the T-bar lodge and triple chairlift, he said. Then they’ll build new facilities in the upper village area, with an emphasis on outdoor recreation beyond downhill skiing, such as snowmobiling, biking, dark sky gazing and more, according to the presentation.

The state owned the ski area from 1974 to 1976, and when it was sold, a deed restriction was placed on the property requiring lifts and trails stay open to the public, Williams said. The mountain opened in December 1963 for skiing, but closed in 2010 after the resort built there fell into disrepair under the ownership of James Confalone of Florida.

More than a new ski lift is needed for the resort to thrive year-round, Williams said.

Those involved with the redevelopment have created an environmentally sensitive design that meets planning commission standards and other regulations, said Matthew Dieterich, executive vice president of James W. Sewall Co., the project’s civil engineer. For example, changes were made after studies were done on the design’s effects on species such as lynx and Northern Spring salamanders, and culverts were extended so they don’t impede migration for fish and other wildlife, he said.

Several commissioners, who traveled from around the state to attend the hearing, questioned how the developer will execute such a project, which calls for the creation of 250 to 300 new jobs, considering the shortage of affordable housing in the area.

There are plans to build workforce housing in the future, though they aren’t detailed in the permit application, Williams said. Some of it will probably be about an hour away because of the lack of available spaces in the summer, Dieterich said.

Christopher King, secretary of residents group Moosehead Region Futures Committee, asked if Williams will assume the liability to pay $3.8 million into an escrow account to maintain the ski area if he settles with Confalone on the purchase and sale agreement. He was referring to a court justice’s ruling in favor of the state, which orders Confalone to pay $4.5 million in damages. Confalone appealed that decision.

Williams said that’s not needed because this is an asset sale that doesn’t involve the purchase of Confalone’s company. The developer and partners plan to work with the attorney general’s office to settle the lawsuit so that the liability goes away with the sale, he said.

The futures committee, along with Karyn Ellwood, a resident of the unorganized territory Misery Gore, requested the public hearing in January.

King also questioned whether language in a letter about sewage treatment upgrades from Treadwell Franklin Infrastructure Capital, dated June 6, means the Moosehead Sanitary District’s customers will have to cover $3 million in financing and their rates would increase.

Dieterich said that’s not the case because fees generated from new hookups associated with development, such as the base lodge and hotel, would contribute to that financing through fees over time. The sanitary district shouldn’t have to raise its rates because they’ll have more customers on their system, he said.

Fourteen community members and another online signed up to voice their thoughts. The majority supported the redevelopment, though some acknowledged that the developer and the proposal aren’t perfect or that questions posed throughout the hearing have to be answered.

John Hussey, who said he worked in the ski industry for more than 50 years, said the proposed redevelopment is a gussied up version of the original [Big Moose Mountain] development plan from the 1960s that’s failed five times.

He didn’t think the developer’s plans were the right way to reopen the mountain. “Unless you have all the property and get rid of Confalone completely, remove him, no one should touch this project,” he said.

The ski area, in its various forms over several decades, is sentimental for many. Area residents, frequent visitors and former employees of the ski area shared memories, and some served as examples for why the ski area should reopen. The local economy and population could bounce back, they said.

Greenville resident Liz McKeil said she’d like to think that her children might one day move back to the area and experience her love for the mountain, but right now, they don’t have any reason to return because there aren’t year-round jobs for them here.

“It’s difficult to attract investors who want to come in and do something with that property,” Levesque said. “These folks have invested some money, over $2 million to date.”

The economic corporation is also working with the Northern Forest Center and C.A. Dean Hospital to create workforce housing, he said.

For some community members, like Ellwood, questions still loom about funding, uphill capacity, the disposal of demolition materials and more. She suggested another hearing was needed to explain the finances involved.

“I don’t think we’ll ever see a perfect buyer who has everything lined up with all the credit and funding before he even starts,” said Rodney Folsom, who works with Friends of the Mountain, a nonprofit that operates the mountain in the winter. “We’ve seen this mountain open and close so many times. I think we need to give this guy a chance.”