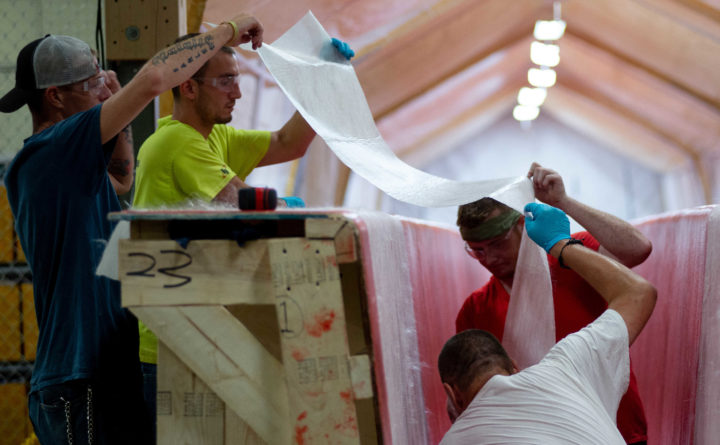 On the manufacturing floor of Advanced Infrastructure Technologies in Brewer on Friday afternoon, four workers started laying out sheets of fiber not much thicker than a piece of paper into a 76-foot wooden mold shaped like a long bathtub. The structure becomes stronger with each layer. Ultimately, it will be strong enough to support traffic as it crosses a bridge in Hampden.

In less than two weeks, the engineering firm will finish building its latest product designed to make bridge construction faster, cheaper and more durable. The company’s new composite bridge support — called a tub girder because of its bathtub-like shape — is made with layers of fiber reinforced with resin. Next year, the new Grist Mill Bridge in Hampden, which carries Route 1A over Souadabscook Stream, will become the first bridge to be constructed using these supports.

The composite tub girder is made almost entirely in the Bangor area. The Brewer-based engineering firm, which spun off from the University of Maine’s Advanced Structures and Composites Center, teamed up with UMaine to develop the technology. The manufacturing and, next year, the installation will also happen locally.

The bridge girders — horizontal structures that run under and support the paved bridge deck — build on the Bridge-in-a-Backpack design that UMaine introduced a decade ago and that Advanced Infrastructure Technologies has commercialized.

Those short- and medium-span, inflatable arch bridges have been used in 23 locations, including in Maine, Massachusetts and Pennsylvania. But the firm hopes its composite tub girder will allow it reach a larger slice of the bridger construction market.

The Bridge-in-a-Backpack technology can only be used at about 10 percent of bridge sites due to a range of factors, including the length of the span and nearby soil conditions. The composite tub girder could be used for about 80 percent of bridges, said Ken Sweeney, Advanced Infrastructure Technologies’ president and chief engineer.

The company is calling the tub girder “The 72-hour Bridge” because it hopes the technology can make it possible to finish a bridge replacement, from installing the supports to the final paving, within that time.

“We expect this company to grow a lot faster because of this,” said Habib Dagher, founding executive director of UMaine’s composites center.

Dagher’s lab developed the composites used in girder construction, and Advanced Infrastructure Technologies, led by Sweeney, further customized the material. Composites are combinations of two or more different materials — often fiber sheets made from carbon or glass that are then reinforced with a bonding resin.

“The technique of making the composite is developed in the lab, it’s tested in the lab and we take it to the next step,” Sweeney said. “Because every bridge is a little bit different, we custom-design each bridge.”

As part of the testing process, Dagher’s team built a bridge prototype using shorter girders. It could withstand weight equivalent to the Statue of Liberty, according to Dagher.

“Because we proved it worked, the Department of Transportation said, ‘OK, let’s build it,’” Dagher said.

“We think this new technology has great promise,” said Joyce Taylor, chief engineer at the Maine Department of Transportation. “Our engineers are excited to use it and sought it out for this project. We are looking for other opportunities to use this technology on upcoming projects, and we’ll be sharing it with other departments of transportation around the nation.”

The composites used to build the bridge will have many advantages over conventional steel and concrete girders, according to Sweeney. They’re resistant to corrosion and can be manufactured to be as strong as needed. They’re also easier to transport because the girders can be stacked, and they weigh considerably less than their steel or concrete counterparts.

“It will be the least-cost alternative, it’s 50 percent lighter than steel, it’s got a long life, low maintenance and also from an environmental standpoint it’s got a reduced carbon footprint,” Sweeney said.

The raw materials for making the composites are locally produced, with the fiber sheets coming from other Maine companies. The final cost of the project will be $2.4 million. The Department of Transportation budgeted $3 million for the project, according to its three-year work plan.

“It’s a whole ecosystem that starts at UMaine, innovates and takes it to the real world,” Dagher said. “That’s really what’s exciting about all this. Research creates jobs.”